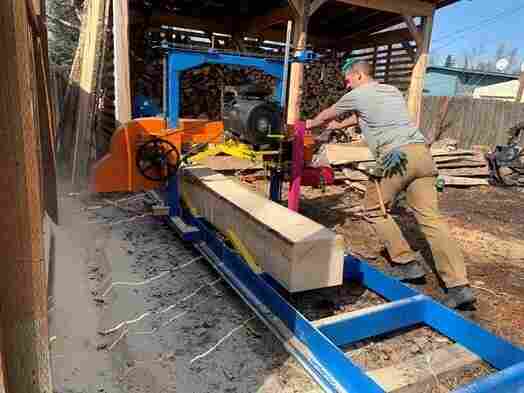 Anchorage, Alaska resident Hans Dow built his own sawmill and began milling his own boards after lumber prices skyrocketed over the last year.

The price of lumber has more than doubled over the last year and economists warn things may stay this way for a while. That’s why people like Hans Dow are getting crafty.

“I was like, well, I want a sawmill. I can make a lot of stuff with it. I also need to learn how to weld…” says Dow, as he hefts a nine foot log onto the deck of his hand-built sawmill. It sits in the corner of his South Anchorage backyard.

Dow spent the winter in his garage, building this sawmill from scratch. He collected the scrap metal and the machinery parts from all over the city. He says his brother urged him to take on the project.

“He was working on his house and we were kind of joking like ‘man, lumber is really expensive. We could probably build or buy a sawmill and make our own siding and break even or come out ahead’ and then I started to do the math,” he says. “And I was like, ‘oh yeah, it would be cheaper.'”

It took him three weeks and three thousand dollars to build.

Dow says furniture projects are in his future. But his first major home improvement effort is to build garden boxes for his wife. If he were to buy this lumber today, it would cost him at least $2000. But for Dow, spruce logs are free. He picks them up from Paul’s Tree Service in Anchorage, where he works as a crane operator. The company removes beetle infested spruce throughout the city.

When the pandemic forced nationwide lockdowns, it forced commercial sawmills, furniture manufacturers and homebuilders to temporarily shut down. “So, demand for lumber kind of bounced back even as supply remained constrained,” says Jeremy Moses, a lumber market analyst with IBISWorld.

“But at the same time, a lot of people wanted more space through the pandemic, more space to work from home,” he says. “People who were kind of stuck at home wanted new furniture, and people buying new homes also bought new furniture.”

71-year old Phil Hudson isn’t a welder, nor does he work for a tree service. The retiree has worked with wood for decades. He says when he built his house 20 years ago, it cost him $3,500. He’s been planning to add more square footage for years. “I’m adding a 16x 24 addition,” Hudson explains, “And then there’s a couple other little bump outs. I’m about tripling my floor area,” he says.

He lives on 40 acres in Willow, Alaska, about an hour north of Anchorage. If he had purchased the lumber he needed last year, he says he might have paid just over $6 a board. This year, basic framing timbers cost at least $15. Depending on the type of wood and whether or not it’s pressure treated, that price can climb above $64 per board.

“You can’t pay these kind of prices,” he says. “It’s like going to the grocery store and spending two hundred dollars and leaving with one bag of groceries.”

Recently, Hudson was in Anchorage to pick up a brand new portable sawmill that just arrived from Portland, Ore. With shipping and an extra box of blades, the mill cost $10,000.

Hudson says he has many acres of standing deadwood on his property that he can mill himself. The spruce beetle has affected more than 1.1 million acres of forest in South Central Alaska since 2015. Much of the deadwood on Hudson’s property is due to the beetle. After Hudson cuts down on the wildfire hazards on his land and finishes his own projects, he wants to use his mill to make a little extra money.

“As this goes on, I’ll make a few bucks in the future by building a kiln, and kiln drying birch.” He plans to sell those boards to people who want new shelving and rough edged table tops. “I don’t know how many years I have left,” he says, “so I might as well do something that’s entertaining.”

Hudson purchased his mill from WoodMizer, an Indiana-based company that manufactures portable sawmills. The company’s cheapest mill is priced at just over $3,000. Prices go up to nearly $60,000. And demand is high.

“The lead time is 44 to 59 weeks right now for a sawmill,” says Kate Sebring, a sales representative for WoodMizer. Before the pandemic, she was selling one sawmill a week. Now, she takes deposits for three or four sawmills each day.

According to Sebring, WoodMizer has shipped dozens of sawmills to villages across the state.

In Alaska, business doesn’t come just from the road system. Don Morgan also came to the WoodMizer office to shop for a sawmill.

“I’m changing my shop into a house, so now I need a shop,” he says.

Morgan took a two hour flight from Aniak, a Native village of about 500 people in Southwest Alaska to put his order in. There are no hardware stores or lumber yards there. Instead, Morgan would have to order his lumber months in advance.

Morgan could expect to pay at least $2,000 in freight alone to ship it all to Aniak from Seattle on a barge. While the sawmill’s $10,000 price tag gave him some pause, he ultimately decided to buy it.

“We had a lot of trouble with building houses and getting material,” he says of his village.

Aniak sits on the Kuskokwim River, east of Bethel, where there are plenty of trees. Morgan says he can tow his mill with a snowmachine or a four-wheeler and find all the wood he needs.